Video games become reality as James Bean and Sandra Sprout are transported inside a popular game and begin their journey towards their highest calling and truest purpose.

Set in inner-city Detroit, during the late 1980s, these high school freshmen realize that they had been brought into Gladiotron for a reason. They have been called into a situation where greatness is demanded of them as they must work to find out what role they will play in an epic battle between the forces of good and evil. Evil, represented by the intergalactic space demons who seek to torment and destroy life across the galaxy; and good, by mysterious helpers who intervene at critical points in the heroes’ journey – nudging outcomes in their favor to overcome otherwise impossible odds. Together with some alien friends, Commander James Bean, Protector of the Universe, and Sargent Sandra Sprout, Leader of the Intergalactic Federation Force, face the evil Zegagumon and more powerful space demons to save the earth and the entire Galaxy. Led by the forces of good, can they escape from a game that is designed to be unbeatable?

The game will be a story-driven, action-adventure game with scaffolded gameplay and will be playable by one to four players through local multiplayer and shown from a 3rd person view in a 3D environment. The game will be made available on PC through Steam and then ported to consoles through their respective online stores afterwards. The Nintendo Switch is a key platform to target, because it is a family-oriented system and it does a good job of facilitating co-play. There will be four unique characters that players can choose from and players will be able to choose the same characters if they like, with one being the original and the others being holograms which can play a supporting role. Players will also be able to change characters at any time. This facilitates scaffolded play because holographic players can disrupt enemies and act as decoys but not be damaged themselves. The game will allow non-holographic players to revive each other if one is in a downed state (temporarily defeated and unable to move). Downed, players will eventually turn into energy and float around the stage near the players who are still battling and can be revived through contact with them. The game ends when all non-holographic players are downed simultaneously. Each character will play slightly differently, but the main controls will remain the same. It will be a mixture between dual-analog, twin-stick shooter controls and 3d platformer controls. Characters will be able shoot in any direction, run, jump, dash, hover, melee attack and guard.

As a story-driven game, Gladiotron will feature several cutscenes and non-player-characters (NPCs) to interact with along the way. All cutscenes will be voiced in English with subtitles to ensure younger players are able to follow along if they cannot read. There will be several instances where progress is difficult, and persistence will be required to proceed. Despite this, the game will not be overtly punitive and should foster feelings of continued growth and progression despite setbacks. This will be done through retained experience points from all encounters. Experience points will be persistent, allowing players to improve their abilities throughout each play session. There will be a series of ten underground towers in the game, with players starting in the bottom tower and having to work their way to the top to win and escape. Each tower will have a different theme and will be full of berserker robot enemies and a final robot boss. Towers will also serve as different chapters in the game. Zegagumon, the space demon who has created the game and abducted players to play in it, has designed the game to be unbeatable by removing every player’s ability to progress vertically, this also comes into play in the story because through intervention, Commander Bean and Sargent Sprout gain the ability to progress vertically through the game, this makes them the first players who can clear towers, setting up a showdown with Zegagumon who is the boss of the tenth and final tower. 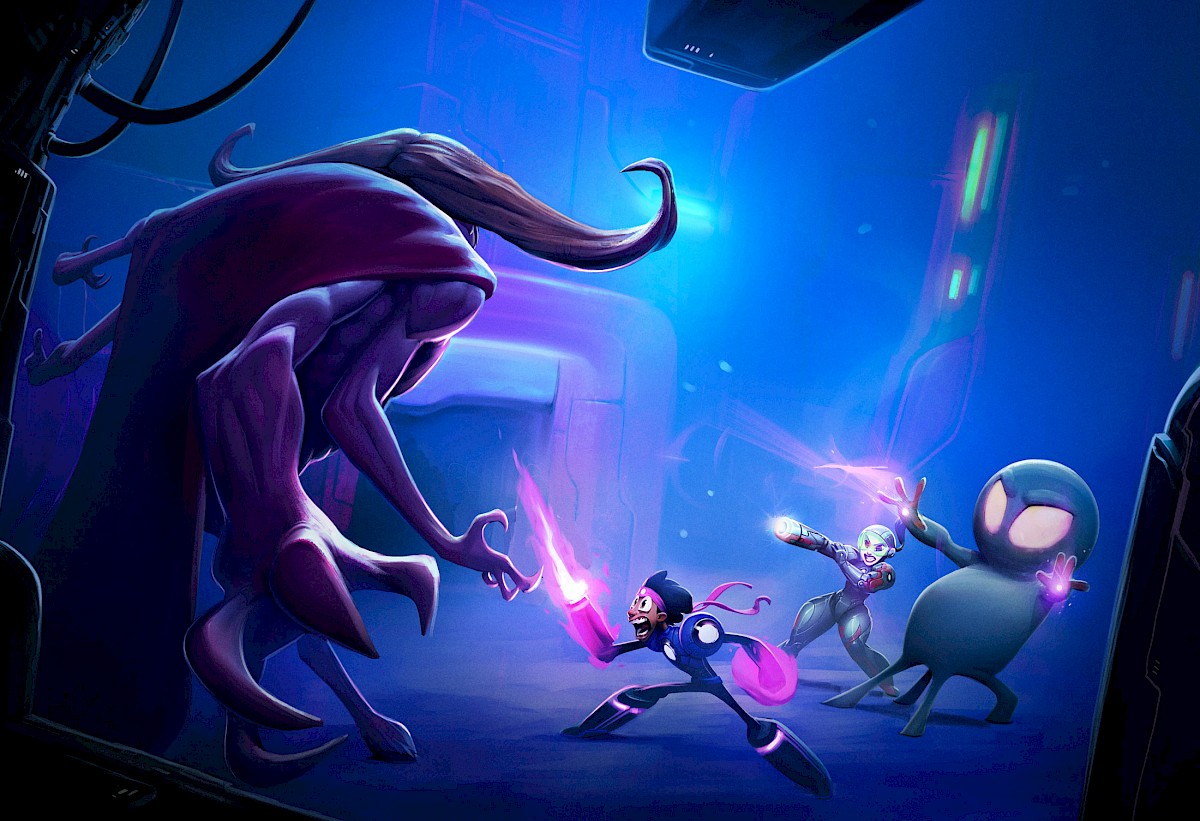 Zegagumon has created the game, because he takes perverse pleasure in seeing players lose hope and he enjoys the moment he breaks their spirits when they realize that trying to win is pointless, they are doomed to try, fail, lose and restart for eternity. To this end, there is a portion of the game that is procedural and sprawls out horizontally from the bottom level of the first tower. Players can progress on this horizontal plane, getting further and further and facing more and more difficult enemies, only to eventually die and restart in the center again. They will retain the experience they’ve gained, but ultimately horizontal progression is not meaningful towards actually beating the game. The horizontal sprawling area will have a city-like area in the center hub where players can interact with NPCs and use their experience points on upgrades. To ensure maximum replayability, the horizontally sprawling levels will be procedurally generated, and enemies and rooms will all be randomly generated and gradually increase in difficulty the further the player gets. This will be a different experience every time the players die and restart. On the other hand, each of the ten towers will be carefully designed by level designers and will always play the same way. Players will at times be expected to go back and forth between the towers and the procedural areas; grinding for experience points in the procedural sections, spending experience points on upgrades and then using the upgrades to overcome difficult parts in the towers. Having the main part of the game fixed, while also having a procedurally generated area will allow the towers to give the game predictability for the speed running community (gamers who look for the fastest way through a game), while also providing replay value through the procedurally generated portions of the game. 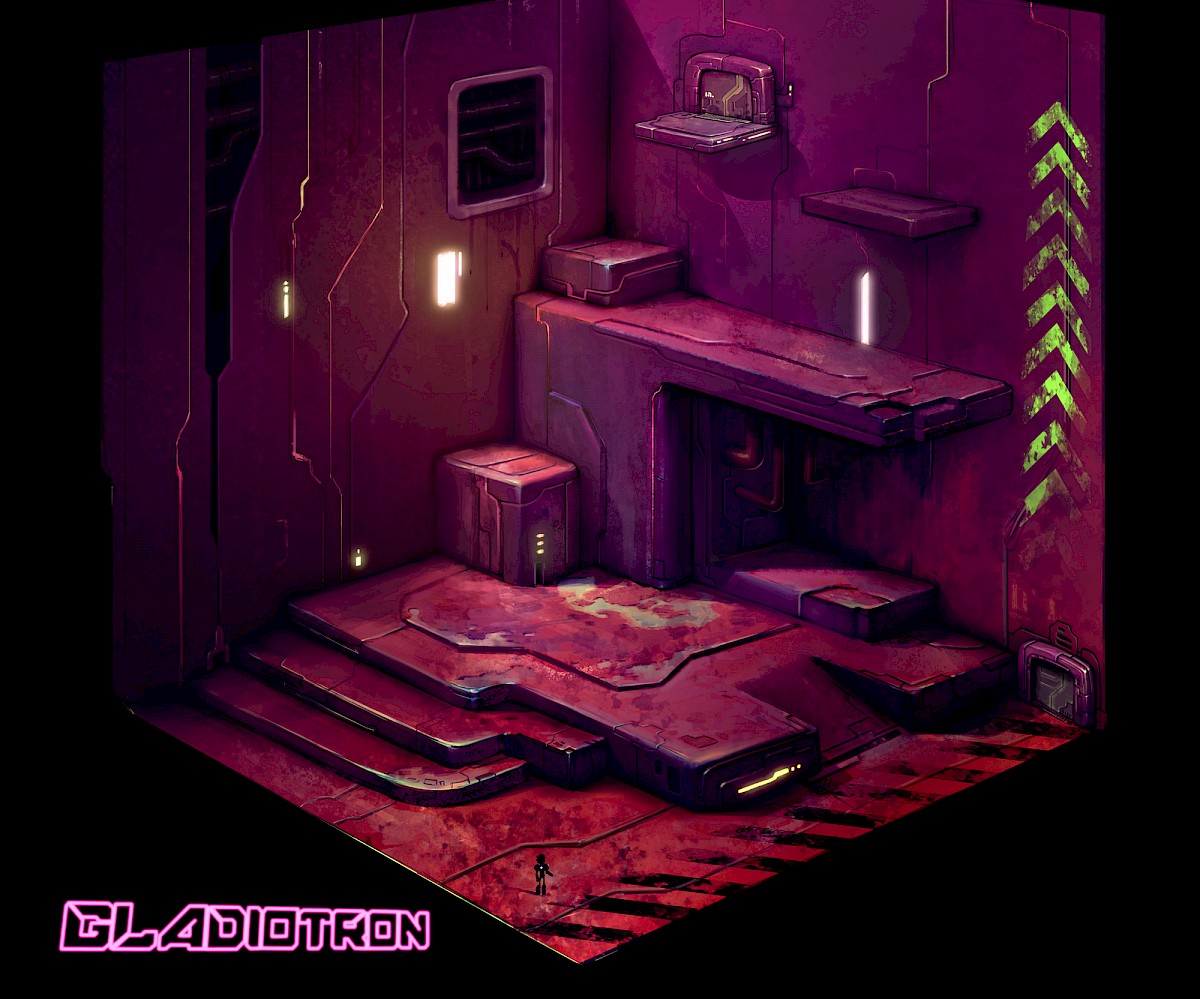 There will be several entities in the game that give Commander Bean and Sargent Sprout some much needed help. Primarily, two scientists who were abducted and forced to make the game by Zegagumon, who find ways to secretly help the two heroes on their mission. There are also powerful and mysterious beings that Commander Bean and Sargent Sprout will come across from time to time who provide incredible upgrades to their suits which drastically change the way they are able to move through the environment, opening new pathways that weren’t previously accessible.

The game and gameplay themselves are designed to foster growth amongst players, but players will consistently see the protagonists overcoming struggles and reflecting on their growth and showing gratitude for progress made. Messages of hope, resilience, gratitude, love and faith will be deeply embedded throughout the narrative.

Story wise, the Gladiotron videogame takes place at the beginning of the overall Gladiotron story arc and serves primarily as the origin story of the two heroes. The episodic animated show will cover the remainder of the overall narrative arc once they escape from the tenth tower. 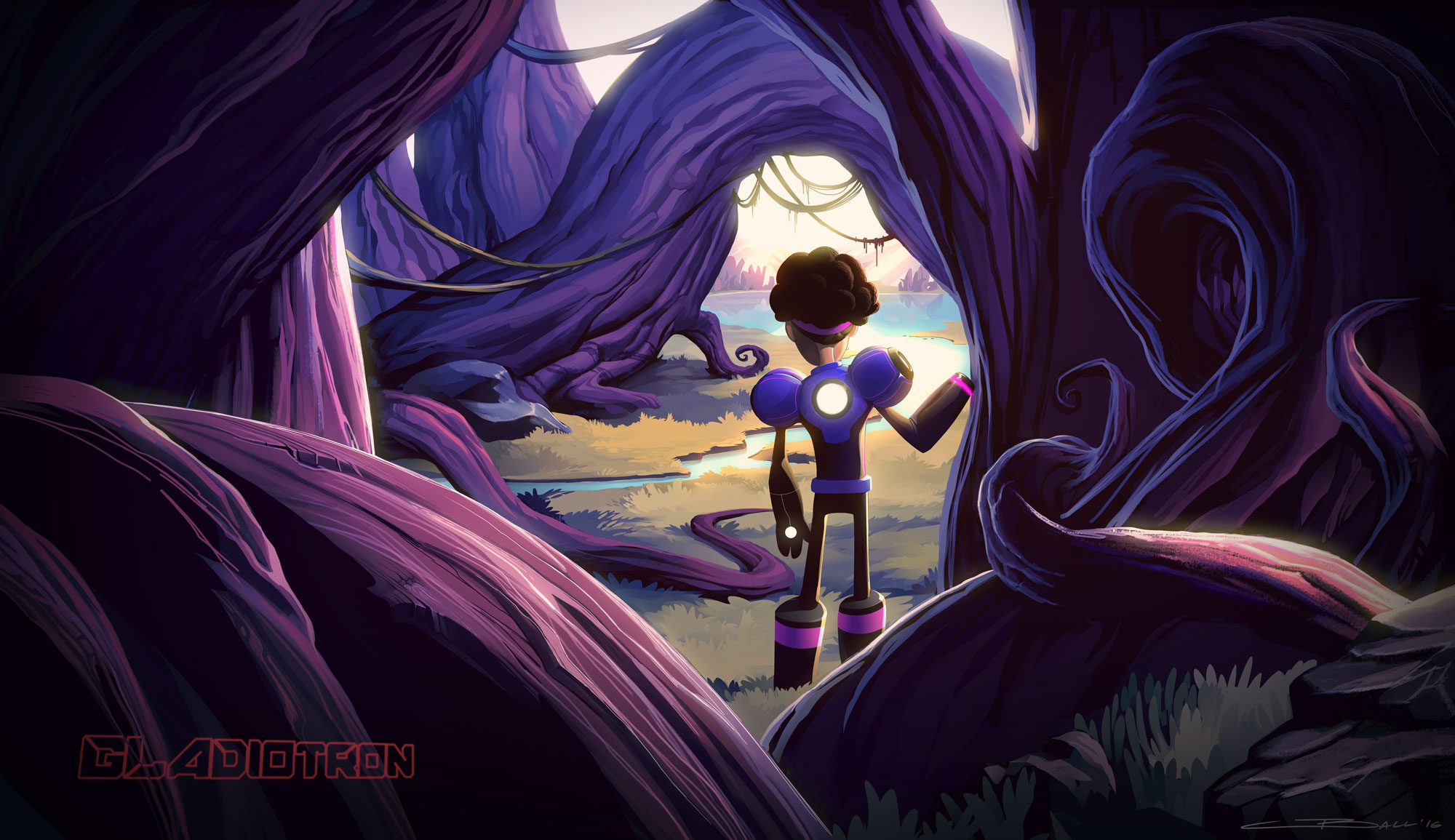 Gladiotron also features an online comic which you can find on this site. The comic is currently in alpha, and we will continue to develop and refine it as we go. The goal is to update with new content and pages regularly. Our update schedule is still being worked out as we create assets, so updates will happen periodically, but probably not that regulary initially. Also, the comic is unique in that it is a 3d interactive comic, so since development has been a bit of a process, we are excited to share it with you!

You can start reading here. 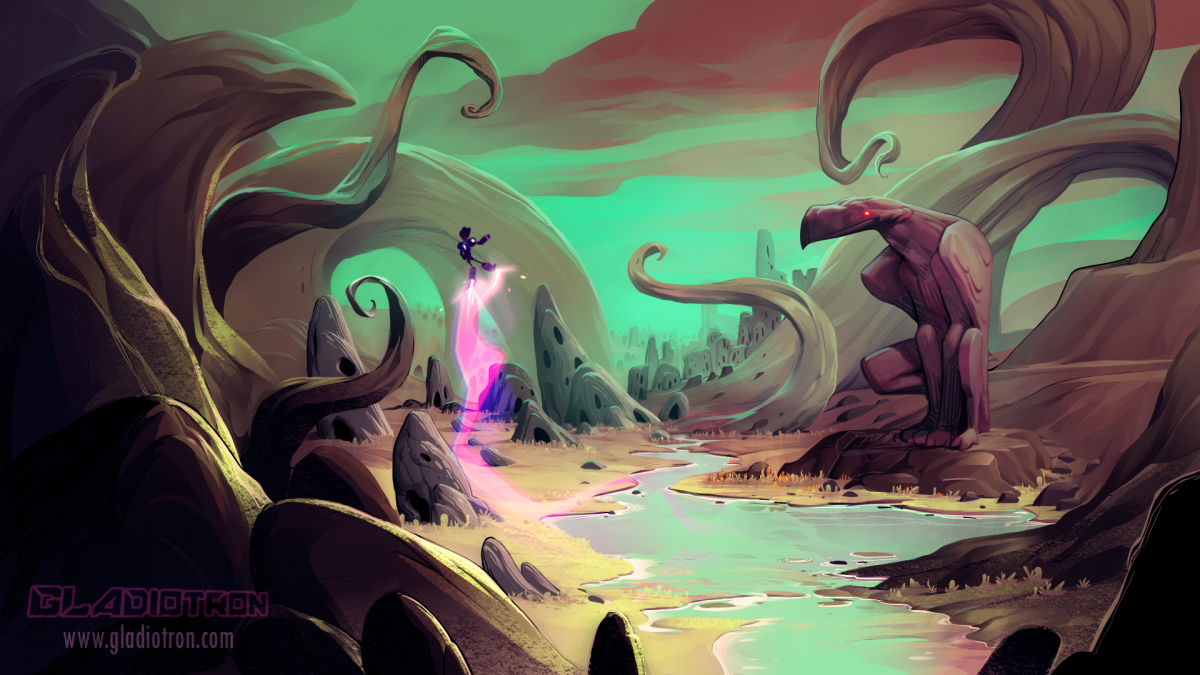 Gladiotron is inspired by the games I loved playing as a kid with a few additons. Having grown up a die hard Nintendo fan, the game has takes a lot influence from the best game I've ever played, Super Metroid and in some ways, I am developing the project to explore the mythology in Metroid universe. Currently the game is in development using Unreal Engine 4. As of writing this, we have been focused primarily on the controls, cameras and overall feel. We're now starting to work out the details of the multiplayer system as well. 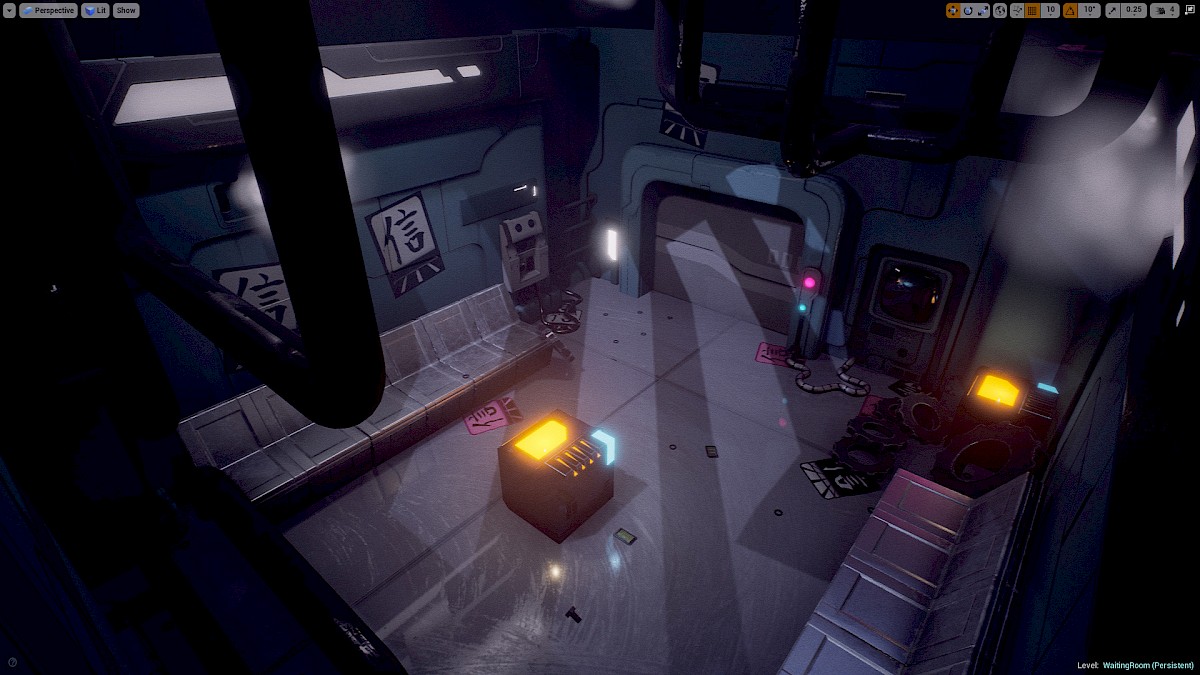 Playable build of the game

Posted by gbball on 21 May 2021 Journal Development

We've recently been a part of the Comics X Games at TCAFs online event this year. I wasn't sure what to expect because it was virtual, but we did push to make a playable version of the project which is now available on our discord. Currently it's only avaliable to patrons with discord access, but I'm going to be looking into getting a version on Steam if possible to start engaging with players to get feedback on what's working and what needs work.

There is still a long way to go, but this is an important milestone! Read more